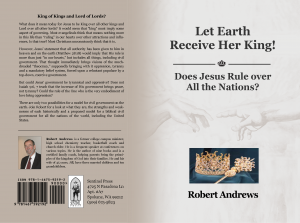 What does it mean for Jesus to be King over all other kings and Lord over all other lords today? It would seem that “king” must imply some aspect of governing. Most evangelicals think that means nothing more in this life than “ruling” in our hearts over other attractions and influences. Is that true? Most Christians unconsciously think it is.

However, Jesus’ statement that all authority has been given to him in heaven and on the earth (Matthew 28:18) would imply that His rule is more than just “in our hearts,” but includes all things, including civil government. That thought immediately brings visions of the much-dreaded “theocracy,” supposedly bringing with it oppression, tyranny and a mandatory belief system, forced upon a reluctant populace by a top-down, coercive government.

But could Jesus’ government be tyrannical and oppressive? Does not Isaiah 9:6, 7 teach that the increase of His government brings peace, not tyranny? Could the rule of the One who is the very embodiment of love bring oppression?

This book looks carefully at the strengths and weaknesses of historical civil governments and proposes a model for a biblical one for all the nations of the world to follow, including the United States.