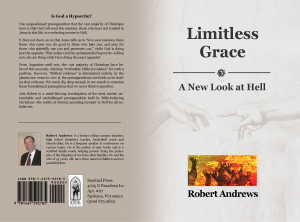 One unquestioned presupposition that the vast majority of Christians have is that God will send His enemies, those who have not trusted in Jesus in this life, to everlasting torture in hell. It does not dawn on us that Jesus tells us to “love your enemies, bless those who curse you, do good to those who hate you, and pray for those who spitefully use you and persecute you” Matthew 5:44) while God is doing just the opposite. That makes God the quintessential hypocrite—telling us to do one thing while He is doing the exact opposite!

From Augustine until now, the vast majority of Christians have believed this anomaly, claiming “irrefutable biblical evidence” for such a position. However, “biblical evidence” is determined entirely by the glasses one wears to view it—the presuppositions one holds as he studies that evidence. We rarely dig deep enough in our search to examine those foundational assumptions that we never think to question.

Join me in a mind-blowing investigation of the most sacred, untouchable and unchallenged presupposition held by Bible-believing Christians—the reality of eternal, unending torment in hell for all unbelievers.

Testimonial for Limitless Grace – A New Look at Hell

“Until I heard the ideas presented in Limitless Grace, I had always struggled to reconcile two disparate views of God and his nature. My experience testified to a God who is thoroughly redemptive, merciful, and tenacious in his determination to save sinners (sinners like me!), while my intellectual understanding of God’s nature was shaped by the doctrine of eternity I’d been taught since childhood. This book gave me the courage to ask those lurking questions I’d always been afraid to ask, and I was surprised to find that the answers I discovered brought harmony to the dissonance between my heart and mind. This revelation truly changed my life, and my trust in God’s goodness, his love, and his provision and care for his children and his creation is no longer colored by fear of the proverbial other shoe dropping, but instead has grown into certainty that death is truly swallowed up in victory!” Jenny Anne M., Spokane, WA