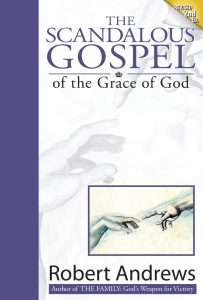 Jesus came to earth as God’s representative announcing His Father’s love and unconditional forgiveness. There was nothing for His listeners to do to obtain God’s forgiveness—no commitment to make, no new leaves to turn over and no vows to “never do it again.” Jesus said God’s forgiveness was absolutely free.

His message was not well received by the religious establishment. They believed in theological sin and had an elaborate sacrificial system to take care of it. However, their  response was to be scandalized that Jesus would actually believe that they needed to be forgiven for actual, tangible sin. They were so angry that He would even say such a thing, not just once. but again and again, that they killed him. They killed Him because He wanted to forgive their sin, sin they could not see, and they would not have it!

The reaction to the proclamation of the unconditional forgiveness of God by grace alone (indiscriminately, just because He wants to!) is the same today, primarily among the religious establishment just as in the 1st century. Cries of “antinomianism” (against the law), “license,” “negativity,” “and “passivity” can be heard wherever the true gospel is preached. In this book I explore what it is that makes the religious so uncomfortable and why this often angry reaction occurs when a no-strings-attached forgiveness is proclaimed. What is “the scandalous gospel” and how can we experience it—the gospel that is truly the “power of God unto salvation?” Join me for a look.

Testimonial for The Scandalous Gospel of the Grace of God

“The biggest issue in this book, as my small group discovered as we studied it, was the concept that we must DO NOTHING to receive God’s grace.  WHAT?

*       No scheduled church activities we MUST attend

*    No list of things to accomplish before payback, I.e. The forgiveness of our sins…………….HOW SCANDALOUS!

“But you MUST have to do something, don’t you?”

NOPE.  NADA.  SIMPLE FAITH is all you need.

The longer I am away from my small group, the more I need to be reminded I need do NOTHING.  No judgment of issues and then making “good decisions”….just Simple Trust in a God who loves me no matter what and has forgiven all my sin.

IN REALITY it all boils down to: YOU DON’T HAVE TO CLIMB THAT LADDER OF PERFORMANCE…Throughout the book, we are constantly reminded of the “OLD MAN” in us…and the Scandalous Gospel that has overcome him.” Mitch L., Atlanta