One of the most important events in Jesus’ life, on a par with the crucifixion and resurrection, is also one of the least

celebrated—the ascension of Jesus Christ. Though the more liturgical churches include it in their liturgy and have it on their calendar each year as a special day, evangelicals rarely, if ever, mention it. When they do, it is something like “Jesus’ work on earth of saving us (from going to Hell) was done and He went back home to Heaven to take up His permanent place of rest, ruling (I’m not sure what over) at His Father’s right hand.”

As we discussed last week, the ascension of Jesus to His seat at HIs Father’s right hand was not a cessation of Jesus’ work, but only a conclusion of the redemptive phase of it. That seating also signified the very beginning of God’s eternal purpose for man—that redeemed man himself rules over the whole earth as God’s vice-regent! The Holy Spirit poured out at Pentecost, Peter said in his Pentecost sermon, was the sign that that rule, over a defeated and defanged Satan and what used to be his kingdom, was now underway.

God did not leave us in the dark as to how that rule would occur. He teaches us that man will use three, God- 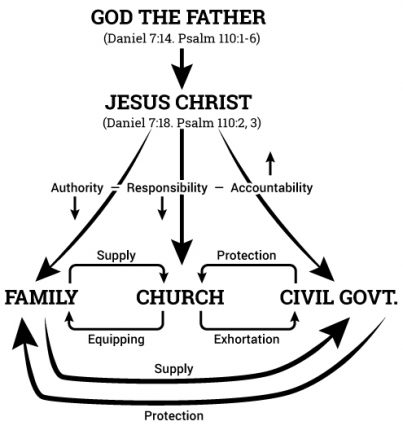 ordained institutions to express His rule. These include the family (Genesis 2:21-24), the church (Matthew 16:18), and the civil government (Genesis 9:5-7)—along with other non-institutional activities that include authority structures, i.e., marketplace, medicine, the arts, athletics, etc.

It is said that “One picture is worth a thousand words,” and that thought is never more true than attempting to express these big-picture, kingdom ideas. When I first saw this diagram years ago and studied it carefully, the whole idea of the kingdom fell into place for me, and it has had a tremendous influence on my life ever since. I call this the “Ship of the Kingdom,” as the diagram resembles a sailboat.

At the ascension, Daniel prophetically gives us the same picture as did David in Psalm 110 that we looked at last week. Jesus received His kingdom, won at the cross, and then immediately passed this kingdom on to us. Our job as Zion, the saints of the most high, is to establish it in practice. This transfer is pictured here in the diagram by the vertical lines, from God the Father to Jesus and from Jesus to us, His people, who populate His kingdom institutions. Here is Daniel’s prophetic rendition of the event, occurring at the Ascension:

“Then to Him was given dominion and glory and a kingdom, That all peoples, nations, and languages should serve Him. His dominion is an everlasting dominion, Which shall not pass away, And His kingdom the one Which shall not be destroyed….But the saints of the Most High shall receive the kingdom, and possess the kingdom forever, even forever and ever” (Daniel 7:14,18). David gives us His prophetic rendition of the same event: “Sit at my right hand until I make your enemies your footstool. When the LORD extends your mighty scepter from Zion, rule in the midst of your enemies” (Psalm 110:1,2).

At that Ascension Jesus took His seat next to His Father in His position of authority and power, to rule as King of Heaven and Earth. The Son of Man then promptly delegated that same authority (the right) to us and simultaneously, at Pentecost, he sent us the same power (the ability) that had come to Him at His baptism— the Holy Spirit. The Spirit empowers us just as He had Jesus—wherever we go, the kingdom of God invades that place!

This is mind-blowing stuff—to really believe what Jesus actually said is true: “I am telling you the truth: those who believe in me will do what I do—yes, they will do even greater things, because I am going to the Father (there will be many kingdom extenders instead of only One” – John 14:12). Actually believing this stuff is what we have called “walking by faith:” living in repentance and complete trust in our Daddy whose love needle for us is stuck on full! Without a taste of that love and a desire to experience it consistently, any discussion of the Ship of the Kingdom is premature.

Why so? The key that unlocks the link between walking by faith and the kingdom is what Martin Luther called “the essence of the Christian life”—understanding the distinction between “what is above me” and “what is beneath me.”

“What is above me” is my relationship with God, forever sealed at the cross: He died for me, personally and individually. He loves me totally, unconditionally and eternally, and I am headed for eternity with Him. He is no longer a God of judgment. Judgment was ALL poured out at the cross, case closed. IT IS FINISHED! “What is above you” is settled.

“What is beneath me,” however, is my purpose for living, the Ship of the Kingdom, and it has nothing to do with my relationship with my Father, because He’s already got me right where He wants me. I am living “from His approval,” not “for His approval.” When I sin, He chuckles and says, “Be patient. Don’t worry and trust Me. We’ll take care of that in due time.”

As I learn to believe, more and more consistently, that Daddy is like that, I will also find myself, more and more consistently, living by faith and not by my addiction to trying to be “good” and not “bad.” I will find that, try as hard as I might, I can’t keep from immersing myself in the truth of the Ship of the Kingdom. Being a kingdom extender is natural, spontaneous, and unconscious!

As we unconsciously find ourselves in attack mode in the world, there are three characteristics that always accompany the authority and power Jesus is delegating to us from His throne. They flow along the vertical lines in the diagram. Also there are horizontal lines representing the relationships between the three institutions themselves in the kingdom. Next week we will investigate what all these lines represent.