When I first came to Jesus, as a sophomore at the University of Oklahoma, my primary concern was “What’s in this new relationship with God for me? What has happened to me? What are the implications in my life and my relationships with those around me? How do I continue in this new way of life?”

So, initially, the gospel is always, just as it was with me, a “me-centered” gospel. And why not? There is potentially a lot in it for me—forgiveness of sin, overflowing love for others, irrepressible joy, unfathomable peace, freedom from condemnation, eternal life, etc., and I began to experience some of that.

But, as time went by, and I slowly matured spiritually and began to realize these benefits, I eventually began to suspect that there might be more to Christianity than just experiencing the blessings that accrue to me. I had been focused on the tree—the individual, personal benefits, and I had not yet seen the forest—the vast sweep of the great plan of God on the earth.

Actually, that was perfectly fine and absolutely acceptable with God. I was right on schedule. That was where I must begin my spiritual journey, but that journey covered a lot more territory than I understood when I began it. When I was ready (some years later), and not a minute before, God began to open my eyes to the forest.

Ultimately, I discovered that the gospel is much more than a man-centered gospel, primarily for individuals and their personal salvation, although the benefits stated above are very real. I began to understand that the gospel and what it accomplished are ultimately and primarily for God Himself. The cross restored to Him something He had lost at the Fall!

As I first began to grasp this understanding, by looking past the individual trees and getting a glimpse of this beautiful, unexplored forest in which I found myself, I gradually began to realize why He put me on the earth. It was not to focus on His job of saving souls, but my job of fulfilling His eternal purpose for me.

What is that eternal purpose? What is God’s ultimate intention? It is that His rule, His kingdom, be extended by His beloved children, into every nook and cranny, over the whole earth. We know that is true, because of God’s original mandate for man in Genesis 1:26-28—to reflect our Father’s image, to rule over the earth for Him, by His law, and to reproduce offspring to continue that rule.

Both Old and New Testaments proclaim the outworking of this plan. Paul, particularly, was chosen by God to reveal it in its fullness. He gives us clear looks at the beauty and vastness of it in several places in His letters, such as 1 Corinthians 15:25-28; Ephesians 1:18-23; 3:1-12; Philippians 3:21, Hebrews 2:5-16. Salvation simply redeems us, cleans us up, and gets us ready to rule for our Heavenly Father over His earth, right now!

“One picture is worth a thousand words,” the saying goes. The following diagram of how this rule is occurring, right now, has formed the foundation, over the years, of my understanding of the brilliance, beauty, and fullness of the forest we are exploring. 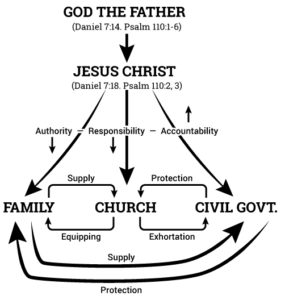 “The earth is the LORD’s, and all its fullness, The world and those who dwell therein. For He has founded it upon the seas, And established it upon the waters” (Psalm 24;1, 2).

God created us (Adam and Eve) as His vice-regents to rule over His creation for Him; Satan stole that authority from them at the First Tree in the Garden of Eden; Jesus won it back at the Second Tree, the cross; His Father then gave His newly-reacquired Kingdom to Jesus at the Ascension, and Jesus, from His new position as King of all Kings at His Father’s right hand, delegated it to us, His people, on the Day of Pentecost! (Acts 2:29-36).

This diagram—that I like to call,”The Ship of the Kingdom,” because it looks like a sailboat—illustrates this vividly. The family, the church, and the civil government are the three God-ordained institutions, along with the less-defined “marketplace,” through which that delegation of the kingdom to us occurs, This kingdom-transfer is represented by the vertical lines. Notice the words “Authority,” “Responsibility,” and “Accountability,” three realities that always characterize the kingdom of God, concepts that are ignored, scorned or reviled in our culture today.

The horizontal lines represent how each institution relates to the other two. Each has its unique mission in God’s world and has its own, clearly defined authority parameters. None of them have any authority over another. Jesus is in authority over each.

Understanding the Ship of the Kingdom has been the vision I have used over the years to explore “the forest,” the big picture of what God is about on the earth. It has been life changing, as it has opened up a brand new way of looking at life that provides meaning and purpose.

Next week we will begin to explore these three institutions—their God-ordained purpose and our place in each.